Provided to you by:

Consumer inflation reached a 41-year high in May while annual home price appreciation tied another record high in April. Here are the key headlines:

 Does the Rise in Initial Jobless Claims Signal a Slowdown?

The Consumer Price Index (CPI), which measures inflation on the consumer level, rose 1% in May, which was much higher than the expected 0.7% gain. On an annual basis, CPI rose from 8.3% to 8.6%, which is the hottest reading in 41 years. Core CPI, which strips out volatile food and energy prices, rose by 0.6%, just above the 0.5% gain expected. Year over year, Core CPI decreased from 6.2% to 6%.

Of particular note within the report, food costs climbed another 1.2% in May, bringing the year-over-year gain to 10.1%. Rents rose 0.6% last month and are now up 5.2% year over year. Fuel also increased 16.9% in May and is now up almost 107% from this time last year. On average across the country, gas prices are over $5 a gallon, which is the highest ever.

What’s the bottom line? Not only does inflation lead to higher costs of goods, but it is also the arch-enemy of fixed investments like Mortgage Bonds because it erodes the buying power of a Bond’s fixed rate of return. If inflation is rising, investors demand a rate of return to combat the faster pace of erosion due to inflation, causing interest rates to rise as we’ve seen this year. 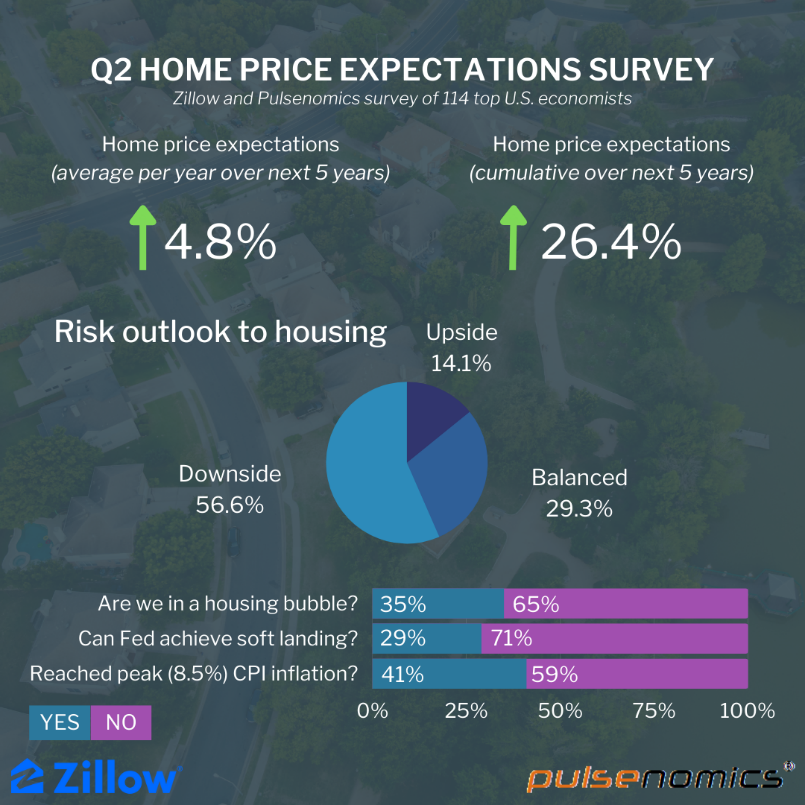 Zillow and Pulsenomics released their Home Price Expectations Survey for the second quarter. This survey, which is released each quarter, asks a distinguished panel of over 100 economists, investment strategists and housing market analysts about their 5-year expectations for future home prices in the United States.

Of the 114 economists surveyed this time, participants said they expect home prices to appreciate 4.8% on average per year over the next 5 years. Cumulatively, they expect over 26% appreciation through 2026.

What’s the bottom line? Respondents were also asked, “Do you believe the U.S. housing market is currently in a bubble?” Of the 98 respondents with an opinion on the question, 65% answered “No.” Some of the reasons provided for this belief included continued low housing inventory, recent price growth caused by fundamentals like demographics and shifting housing preferences, rising rents, the work-from-home revolution, and high homeowner equity. So while it may not be easy to buy a home right now, it should still be a smart financial decision.

CoreLogic released their Home Price Index report for April, showing that home prices rose by 2.6% from March and 20.9% on a year-over-year basis. This annual reading remained stable from March and matches the highest reading in the 45-year history of the index. In addition, CoreLogic estimated that 70% of homes sold above the asking price this spring.

What’s the bottom line? CoreLogic forecasts that home prices will appreciate 1.2% in May and 5.6% in the year going forward, though this annual figure is still much more conservative than many other forecasts. But even if CoreLogic’s annual forecast is correct and home prices rise closer to 5% over the next year, this level of appreciation is still extremely meaningful for wealth creation. For example, if someone bought a $400,000 home and put 10% down, that means they would gain $20,000 in appreciation over the next year and earn a 50% return on their investment due to leverage.

Does the Rise in Initial Jobless Claims Signal a Slowdown?

Initial Jobless Claims rose by 27,000 in the latest week, as 229,000 people filed for unemployment benefits for the first time. Continuing Claims, which measure people who continue to receive benefits after their initial claim is filed, remained unchanged at 1.306 million. This is the lowest number of Continuing Claims in more than 50 years.

What’s the bottom line? While Initial Jobless Claims decreased in the latest week, the 4-week average is at the highest level since mid-February. This could be an early sign that companies are starting to not only pause hiring but are also beginning to lay people off due to slowdowns. It’s crucial to monitor this report and see if Initial Jobless Claims continue to rise.

June 13 is National Cupcake Lover’s Day. This recipe for Peanut Butter Chocolate Cupcakes from our friends at Taste of Home is perfect for celebrating all week long.

Line 12 jumbo muffin cups with paper and fill them halfway with batter. Add a tablespoon of peanut butter mixture to the centers of each and cover with the remaining batter. Bake at 350 degrees Fahrenheit for 25-30 minutes or until a toothpick inserted comes out clean. Cool for 10 minutes and then remove from pans and place on wire racks to cool completely.

More inflation and housing data are ahead, beginning Tuesday when the Producer Price Index for May will give us an update on wholesale inflation. On Wednesday, June’s National Association of Home Builders Housing Market Index provides a near real-time read on builder confidence while Thursday brings Housing Starts and Building Permits for May.

Also of note, we’ll get a read on how small businesses are feeling when the National Federation of Independent Business Small Business Optimism Index is reported on Tuesday. The latest Jobless Claims data will be released as usual on Thursday. Plus, important manufacturing data for both the New York and Philadelphia regions will show if there is more evidence of a slowdown.

But perhaps the biggest news will be the Fed’s two-day meeting beginning Tuesday, with the Monetary Policy Statement and press conference coming on Wednesday. Again, investors will be closely watching their actions and commentary regarding inflation.

Mortgage Bonds ended the week much lower, breaking beneath support at 100.531 after a hotter than expected CPI report on Friday. There is a lot more room to the downside now that this important floor has been broken. Looking at the 10-year, yields are currently at around 3.15%, with no real ceiling or resistance levels to stop them before reaching the next ceiling at 3.25%. If that level does not hold, we could see yields move as high as 3.50%. 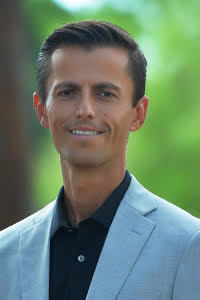